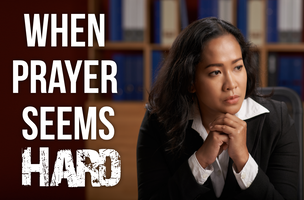 Have you ever thought that prayer didn't work for you? What about times when it seemed so hard to pray? All of us feel this way from time to time but don't give up just yet.

One day the Holy Spirit showed me something about the life of a praying man of God in the Bible. His name was Daniel. We would call Daniel a great man of God, favored by the Lord, and a spiritual prayer warrior. When you read his testimony, however, there was a time when he prayed and heard nothing. He probably felt that prayer wasn't working for him either.

Daniel describes a time when he prayed for twenty-one days and heard nothing. He was fasting, praying, and seeking God with everything in him. I am sure Daniel was getting hit in his mind with all kinds of thoughts and imaginations. Like us, he was probably getting discouraged, having difficulties staying focused, and tempted to give up and quit. Nevertheless, Daniel stayed the course.

Something awesome happened on his twenty-first day of prayer. Daniel had an angelic encounter that explained what was going on.

"In those days I, Daniel, was mourning three whole weeks. I ate no pleasant bread, neither came flesh nor wine into my mouth, neither did I anoint myself at all, till three" whole weeks were fulfilled. And in the four and twentieth day of the first month, as I was by the side of the great river, which is Hiddekel, I lifted up mine eyes, and looked, and, behold, a man clothed in linen, whose loins were girded with pure gold of Uphaz: his body also was like the beryl, and his face as the appearance of lightning, and his eyes as flaming torches, and his arms and his feet like unto burnished brass, and the voice of his words like the voice of a multitude." (Daniel 10:2-6)

"Then said he unto me, Fear not, Daniel; for from the first day that thou didst set thy heart to understand and to humble thyself before thy God, thy words were heard: and I have come for thy words' sake" (Daniel 10:12).

The angel told Daniel his prayers were heard from the very first day he set his heart to pray. Daniel did not know that. All Daniel could feel was the warfare. This is the same thing that happens to us. We pray, hear nothing, and wonder why we cannot hear the voice of God.

There are some powerful lessons here for every prayer warrior: God hears your prayers, sometimes your prayers are resisted by demonic principalities and powers, and the main lesson, is never giving up because your answer is on the way.