Biblical Power To Name A Thing 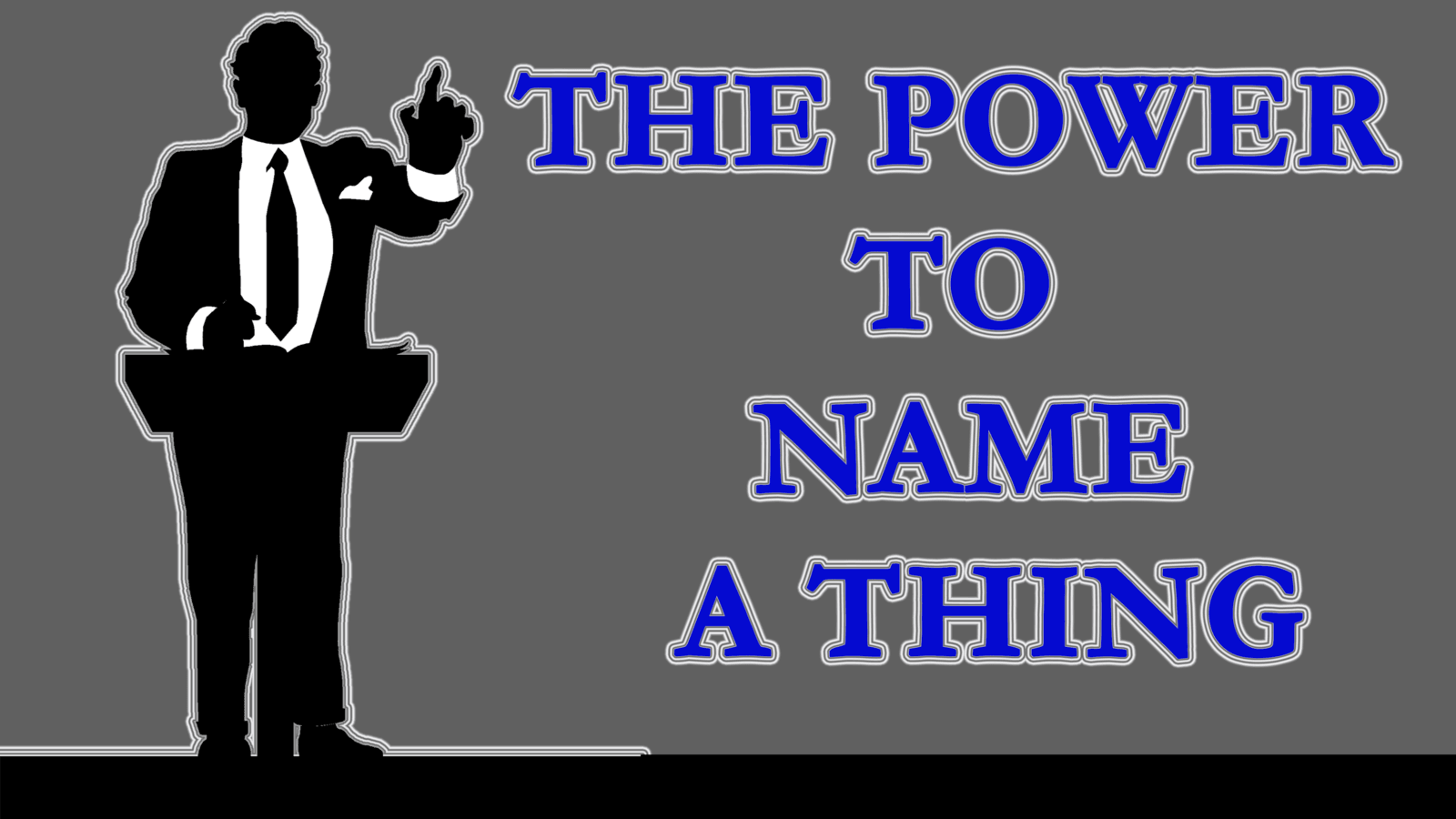 Names reveal identity and point toward purpose. And God said let there be, let there be, and let there be. If you only knew God from reading Genesis Chapter One, you would conclude that he is a voice with creative power. God needed to train Adam in the power of words.

“And out of the ground the LORD God formed every beast of the field and every fowl of the air; and brought them to Adam to see what he would call them: and whatsoever Adam called every living creature, that was the name thereof” (Genesis 2:19).

Names reveal identity and point toward purpose. Almost every time I travel by plane people will ask me the same two questions. The first is, “What’s your name?” And the second is, “What do you do?” How we answer tells strangers what to think of us. This is because what we call ourselves sends messages of identity to those that don’t know us. Wanting to know what our work entails is rooted in our DNA.

People wrongly associate work (occupations) with identity. With me, I can answer that question in several ways. If I say that I’m an author, people find that exciting and want to know what I write about. If I say I’m an educator, they want to know what I teach. If I say, I’m a businessman, they want to know what type of business. If I say, I’m a preacher, they tend to look out the window hoping I won’t call down fire and brimstone. But what if I said cashier, doctor, waiter, security guard, cook, construction worker, or banker? All these names convey different meanings to people. That’s because names, titles, and labels tell people who we are. Names have meaning. They mean something to you and to others.

Why are names so important? Because names reveal function, form, design, and identity. The Bible is full of examples of names with meanings.

Joshua, Jehovah is salvation
oseph, Jehovah has added
Elijah, My God, is Jehovah
Samson, One like the sun
Ruth, Friendship
Zebulun, Exalted

Names may present pictures of who you are to others, but they don’t necessarily define who you are, only what you do. Most of us have had jobs that were temporary. That’s why we don’t let our jobs determine who we are.

Carnal men often make wrong judgments of people based on their job titles because they associate value and prestige to various occupations. Not so with the Christian that looks at fulfilling a purpose as having the most significant value. To me, success in life is doing what God has called you to do. All else is vanity.

Christians honor God through their work. That’s why they are careful not to work advancing anti-Christ values or sinful activities. Jobs should never violate biblical standards of integrity and godly character.

Adding value and serving others while reflecting the glory of Christ in a sinful world strengthens the fabric of society. Jesus made it clear, “No man can serve two masters: for either he will hate the one and love the other; or else he will hold to the one and despise the other. Ye cannot serve God and mammon (Matthew 6:24).

Apostle Paul shows us a pattern of understanding identity: name, calling, and assignment. He wrote, “Paul, a servant of Jesus Christ, called to be an apostle, separated unto the gospel of God” (Romans 1:1). Break out the words: servant, apostle, gospel. He calls himself first a servant to Christ. Second, he labels himself an apostle. Third, he declares his assignment as separated unto the gospel of Christ.

Your name might not be Paul, and your assignment may not be to preach the gospel as an apostle, but you can surely say you are a servant of Christ, called by God, and given an assignment by the Holy Spirit.

Is God pleased with your work? Here is a powerful illustration of honoring God.

“The story is that of an accomplished young pianist making his concert debut at Carnegie Hall. His playing was magnificent, and after he departed from the stage, the audience erupted in cheers. The kindly stage manager urged the young virtuoso to go out for his encore. But the young man refused. The older man replied: “Look out through the curtains. They love you! Go take an encore! The pianist answered: “Do you see the one old man in the balcony on the left?” The stage manager peered out and answered that he did see him. “That man is seated. I will not give an encore until he stands and cheers.” Exasperated, the stage manager said, “Only one man is not standing, and you will not take an encore?” At this, the pianist replied: “You see, that old man is my piano teacher. Only when he stands will I go take an encore.”[1]

You may look through a glass darkly at times, but, as you have already learned, your identity comes from Christ and is revealed by the Holy Spirit as you journey through this life. The most important thing a man can do is please God through his work.

Eve did not name herself. Adam named Eve woman. Names give identity. “And Adam said, This is now bone of my bones, and flesh of my flesh: she shall be called Woman, because she was taken out of Man. (24) Therefore shall a man leave his father and his mother, and shall cleave unto his wife: and they shall be one flesh. (25) And they were both naked, the man and his wife, and were not ashamed” (Genesis 2:23-25).

1a) woman (opposite of man)

Where Adam was made from soil, the woman was made from Adam. In other words, she is a refined version of Adam being one step further away from the soil. Just as with the animals, God brought the woman before Adam to see what he would name her. This is profound because it deals with identity. Identity is the individual characteristics by which a thing or person is recognized or known.

God could have named Adam’s helpmeet but instead gave that assignment to Adam. “She shall be called a woman.” Where a man gets his identity from God, a woman receives a measure of her identity, not all, from her husband.

Without the woman the man is incomplete, and without the man, the woman is incomplete. Men. Husbands. This is important. Give your wife identity. Tell her who she is. Let her know that she completes you, and without her, you can never achieve the fullness of your calling. Tell her that she is your wife, made by God to help you complete your divine assignment. Tell her that she married a king that is on his way to fulfilling God’s plan. Declare over her the attributes of a wife found in the Proverbs 31 woman.

God could have named Adam’s helpmeet but instead gave that assignment to Adam. Eve did not name herself. Adam said, “She shall be called woman.” As said already, where a man gets his identity from God, a woman gets a measure of her identity from her husband. Names provide identity, function, and purpose. Names are important to God. Who do you say you are? Who do you say your spouse is?