You Are A Royal Priesthood of Kings 1 Peter 2:9 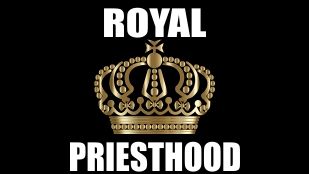 A KINGDOM OF PRIESTS

Kings have authority to occupy. Jesus commanded, “Occupy till I come” (Luke 19:13). Occupy does not mean to withdraw. Occupy means to march aggressively into another’s territory with spiritual force for the purpose of conquest and occupation.

Today, there is a division within the body of Christ over rapture teaching and dominion teaching. The rapture apologists say the world is going to hell in a hand-basket and the body of Christ simply needs to be “rapture ready” because Jesus is returning soon to rescue His sheep.

The dominion-minded teach that the body of Christ is called to be salt, light and a city set on a hill. They are also called into the ministry of the “restoration of all things” (Acts 3:19-21). In short, they are given a measure of delegated spiritual authority by Christ to invade, occupy and influence the world.

It seems to me that both camps should agree on continuing the ministry of Christ known as the Great Commission. To accomplish this, however, means that churches will have to get out of the entertainment business, stop building adult day care ministries and repent from preaching Christian pop-psychology and religious humanism.

What camp you support will determine your worldview. There are good people in both camps. Most reading this don’t want to let the devil continue his ministry of stealing, killing and destroying without challenge. They understand the spiritual warfare and have put on the armor of God. They want to raise their children in a Christian home and within a society that celebrates Christian values, morality, and character.

More and more they are recognizing that withdrawing from cultural warfare, kingdom of darkness against the kingdom of God, is not biblical. Scripture says, “Submit yourself to God, resist the devil and he shall flee” (James 4:7).

THE SPIRITUAL BATTLE IS ON

The devil doesn’t flee without resistance. You can’t escape the warfare no matter how rapture ready you may be. There are many Scriptures that teach Christ’s disciples to engage the enemy, not ignore the enemy. As already noted, it doesn’t matter what camp you are in, there is no escaping the spiritual warfare of your generation. Through revelation, the Apostle Paul pulled back the curtain to show us what we are up against.

“Finally, my brethren, be strong in the Lord, and in the power of his might. Put on the whole armor of God that ye may be able to stand against the wiles of the devil. For we wrestle not against flesh and blood, but against principalities, against powers, against the rulers of the darkness of this world, against spiritual wickedness in high places. Wherefore take unto you the whole armor of God that ye may be able to withstand in the evil day, and having done all, to stand. Stand therefore, having your loins girt about with truth, and having on the breastplate of righteousness; And your feet shod with the preparation of the gospel of peace; Above all, taking the shield of faith, wherewith ye shall be able to quench all the fiery darts of the wicked. And take the helmet of salvation, and the sword of the Spirit, which is the word of God: Praying always with all prayer and supplication in the Spirit, and watching thereunto with all perseverance and supplication for all saints.” (Ephesians 6:10-18)

THE FULL ARMOR OF GOD

Paul describes our spiritual warfare and teaches to put on the armor of God. Armor is for fighting, not running. It’s significant to mention that spiritual warfare is not confined to the spirit realm. Demonic powers manifest themselves in the natural. They can teach and make converts of their philosophy. Just turn on the television and you can view their demonic folly as they create strongholds in the minds of men. These thoughts lead men in various directions. Some become politicians, school teachers, university professors, business owners, bankers, filmmakers, musicians, bloggers, or reality television characters.

Spiritual conquest, occupation, and manifesting the Kingdom of God will require you to embrace sonship and guard your mind against demonic deception. “For as many as are led by the Spirit of God, they are the sons of God” (Romans 8:14). Understand what it means to be part of the royal priesthood of kings. You are part of a kingdom of priests, a holy nation of people, a chosen people. Be rapture ready but put on the armor of God, engage the enemy of your faith, and influence your world for Christ.