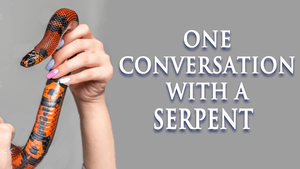 Conversations have power and wrong conversations can destroy your life. The serpent was hanging around the forbidden tree in the Garden of Eden and one conversation resulted in the fall of man.

To understand the relationships between the male and female, we must look at their original design and how that design was broken. In the beginning, God created a man from the ground and breathed life into his nostrils, and he became a living being with a spirit, soul, and physical body. The man was placed in a garden to work and manage.

All the garden was Adam’s to tend and eat except for a forbidden tree called the Knowledge of Good and Evil. Something went terribly wrong.

God saw it was not good for Adam to be alone, so God made a woman to help him, blessed them, and instructed them to take dominion. Notice the warning, “Thou shall not eat of the tree of the Knowledge of Good and Evil.”

“Now the serpent was more subtle than any beast of the field which the LORD God had made. And he said unto the woman, Yea, hath God said, Ye, shall not eat of every tree of the garden? And the woman said unto the serpent, We may eat of the fruit of the trees of the garden: But of the fruit of the tree which is in the midst of the garden, God hath said, Ye shall not eat of it, neither shall ye touch it, lest ye die. And the serpent said unto the woman, Ye shall not surely die: For God doth know that in the day ye eat thereof, then your eyes shall be opened, and ye shall be as gods, knowing good and evil. And when the woman saw that the tree was good for food and that it was pleasant to the eyes, and a tree to be desired to make one wise, she took of the fruit thereof, and did eat, and also gave unto her husband with her; and he did eat.” (Genesis 3:1-6)

In the garden, there was a talking serpent. The Bible says this snake was craftier than any beast God had made. This serpent introduced deception on a level never seen before.

The serpent was another voice in Eve's life.
There is a great danger when you let the wrong voice speak into your life. The serpent was another voice. Not the voice of God or the voice of her husband, but another voice. There is a saying, “Tell me who you listen to, and I will tell you where you are going.” In marriage counseling, there is a reoccurring event as a third voice begins to speak to one of the spouses. That third voice is the reason for many marital difficulties.

The serpent challenged God’s Word.
The serpent differed with God’s word. He disputed, “You shall not surely die.” It’s the same today, Satan wants to take exception with God’s word in your life. Scripture says, “For the word of God is quick, and powerful, and sharper than any two-edged sword, piercing even to the dividing asunder of soul and spirit, and of the joints and marrow, and is a discerner of the thoughts and intents of the heart” (Hebrews 4:12).

The serpent challenged Eve’s memory of God’s Word.
Memory reminds you of past experiences and helps you make the right decisions. The serpent challenged Eve’s memory asking, “Yea, hath God said?” Your memory of God’s word is important. Many times, God reminds us to remember the word of God and the danger when we don’t. Scripture says, “But thou shalt remember the LORD thy God: for it is he that giveth thee power to get wealth, that he may establish his covenant which he swore unto thy fathers, as it is this day.  (19)  And it shall be, if thou do at all forget the LORD thy God, and walk after other gods, and serve them, and worship them, I testify against you this day that ye shall surely perish” (Deuteronomy 8:18-19).

The serpent introduced doubt.
Doubt is the state of being unsure. The Bible says that it is impossible to please God without faith. Faith resides in the heart. One can quote Scripture and still not believe. One can believe in his head and still not believe in his heart. This is what we call a faith battle. The serpent introduced doubt to Eve. Doubt destroys faith, confidence, and trust. Scripture says of Abraham. “He staggered not at the promise of God through unbelief; but was strong in faith, giving glory to God; (21) And being fully persuaded that, what he had promised, he was able also to perform.  (22)  And therefore it was imputed to him for righteousness.  (23)  Now it was not written for his sake alone, that it was imputed to him;  (24)  But for us also, to whom it shall be imputed, if we believe on him that raised up Jesus our Lord from the dead;  (25)  Who was delivered for our offences, and was raised again for our justification” (Romans 4:20-25).

The serpent suggested another path.
The Bible says, “Trust in the LORD with all thine heart and lean not unto thine own understanding. In all thy ways acknowledge him, and he shall direct thy paths” (Proverbs 3:5-6). The serpent suggested another course for Eve’s life. He said, “In the day you eat thereof, then your eyes shall be opened, and you shall be as gods, knowing good and evil.” Here, the serpent increases the deception by suggesting to Eve, “You shall be as gods.” Eve pondered the possibility. She stopped looking at her creator for purpose and considered the serpent’s proposal. The lesson is this, you should never listen to the created to tell you who you are. Scripture says, “There is a way which seemeth right unto a man, but the end thereof are the ways of death” (Proverbs 14:12).

The serpent got Eve’s eyes off God and on to self.
“And when the woman saw that the tree was good for food and that it was pleasant to the eyes, and a tree to be desired to make one wise, she took of the fruit thereof, and did eat, and also gave unto her husband with her; and he did eat” (Genesis 3:7). Take special note of the words saw, good, pleasant, desired, wise, eat, and gave. Notice the first and last word, saw and gave. What you are looking at is where you are going. What you are looking at, you will give to another. What you are looking at has power. If Satan can change your focus, he can change your destiny. Eve saw that the tree was good, pleasant, and desired. These are all expressions of the carnal soul, not the spirit.