No Third Genders In The Kingdom Of God 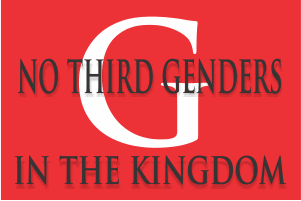 There are no third genders in the kingdom of God. The use of the word “mankind” has been classified by the European Union of 28 Nation States as “an attack against gender equality.” Let’s be clear, the creation of man (meaning the male and female species) was God’s idea.

God said, “Let us make man in our own image and after our likeness” (Genesis 1:26). In this verse, the word “man” means mankind. This would include both the male and the female. There is no third gender. A third species is a complete fabrication.

The answer to male and female identity is found in the Creator’s design. To understand the male and female species, you must go back to the beginning and look at the creation of the man and woman.

To understand the purpose of the male and female kind, we must examine their design. Design is a plan for something with a specific role, use, or effect. We could say a design then is a blueprint. This brings us to the place of understanding God as the great designer. The purpose of something is the reason why it was made, and its blueprint reveals its purpose.

Let’s examine God’s blueprint. When God designed the male, he took of the earth, formed the man, and breathed life, not air, into his nostrils and man (Adam) became a living soul. I call this the God spark. (At this point, there are no female species.)

Not only did God create Adam, he made a domain for the man to flourish. That domain the Bible calls the Garden of Eden. We could call it the kingdom of God. In this kingdom, the man was given dominion, or said another way, given a place to rule, reign, and fellowship with his creator.

Three of the great confusions of the male and female species is identity, purpose, and how they relate with one another. Identity is the individual characteristics by which a person is known. Purpose is what an individual is to do. Relating is the ability to connect purpose.

People want to know who they are, where they came from, and what they are supposed to do with their lives. As already said, the creation of Adam was God’s idea. His creation was a creation of purpose and on purpose.

Males did not choose their individual characteristics and definitions of manhood. They didn’t come up with their own design. Neither could they choose their different features. All these characteristics were in the plan of God. With the man’s design, however, is the responsibility of manhood. Responsibility is the trait of being answerable to someone for something or being responsible for one's conduct. As already noted, the word manhood is offensive to the gender confused, yet manhood describes the males species.

Where purpose is not known, misuse is unavoidable. If you don’t understand the purpose of a thing, then it’s easy to get off track and enter the realm of abuse. Said another way, wrong use happens when you don’t understand design. This is one of the reasons Satan is introducing gender confusion into society.

To understand purpose, the male and female must look to their Creator and not the creation for identity, definition, direction, and use. Neither can their traits be redefined by those God says are reprobates. This leads us to explore God’s original intent of man’s design. Let’s start with the domain, the Earth. Scripture declares, “The heaven, even the heavens are the Lord's, but the earth hath he given to the children of men” (Psalms 115:16). Notice that man (both male and female) was created for dominion on Earth, not heaven.

Occupy Till I Come,

Seek First the Kingdom of God,

and Parable of the Talents.

The woman also needs instruction for living. She too is frustrated when she doesn’t understand how God designed her. Evil spirits take advantage of Scriptural ignorance. Apostle Paul wrote, “For I know this, that after my departing shall grievous wolves enter in among you, not sparing the flock. Also of your own selves shall men arise, speaking perverse (morally corrupt) things, to draw away disciples after them” (Acts 20:29-30). As already said, there is no third gender. Those that preach or teach such things are in error. There is no third gender in the kingdom of God.

(c) Thanks for your prayers and support.
Jonas Clark
www.jonasclark.com