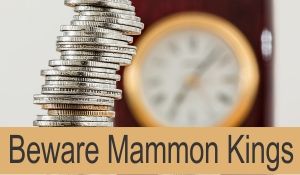 As a Christian, you are part of the Kingdom of God. He has an economic model. Mammon also has an economic model. You work Kingdom principles of increase by working (2 Thessalonians 3:10), sowing and reaping (2 Corinthians 9:6), saving and investing (Deuteronomy 28:5-8). The mammon kings are pleased. This gives them something to tax. Without you, they have no source of wealth because they produce nothing.

Jesus spoke of the kingdom of Mammon (Matthew 6). He said you could not serve two masters. As a Christian, you know that. You do not serve Mammon yet you are living within the borders of Mammon’s territory. Notice Christ reveals two economic systems. It’s needful to understand that the kings of Mammon have guiding economic principles that will affect you and family. Since you are getting paid in dollars, for example, white paper with green ink, you are participants in their economics. Since you use their paper currency as a means of transaction, you take part in their system.

If you don’t understand their economic principles, you will suffer losses. You didn’t learn their principles in school because it is not to their advantage to teach you their principles. In 2008, for example, some people lost as much as half their retirement savings. Because of ignorance or inaction, they may lose more this year. In 2008, the world stock market lost some 27 trillion dollars. (How much will be lost in the next downturn?) Was any of those losses the stored wealth of Christians? Was it the will of God for Christians to lose their hard earned money and not be able to finance Kingdom projects? Of course not.

Just because you are a citizen of the Kingdom of God doesn’t mean that you are not being controlled by the Mammon kings. Most of these kings, you will never meet yet they govern you just like they did the children of Israel under Pharaoh. Their economic policies and decisions affect you. Ignoring them is disastrous to your ability to advance and establish the kingdom of God on the earth (Matthew 6:33).

Our government uses the wisdom of John Maynard Keynes as an economic model for our country. He had strong Marxist overtones in his teachings. World Central Bankers and politicians love him. He didn’t like the idea of a person like you working hard and saving money. He said in his book “General Theory of Employment, Interest and Money” published in 1936, “Why should anyone outside a lunatic asylum wish to use money as a store of wealth?” The answer is because they believe that the money they save today will have at least the same value twenty years from now. They also believe they can accumulate it as a seed for future investments. Unfortunately, our FED fiat banking system continues to attack the man that saves through the devaluation of our currency. Keynes would think that you are a fool to save money. He would also approve of the State purchasing businesses as our government has recently begun to do. He said, for example,

“For my own part, I am now somewhat skeptical of the success of a merely monetary policy directed towards influencing the rate of interest. I expect to see the State, which is in a position to calculate the marginal efficiency of capital-goods on long views and on the basis of the general social advantage, taking an ever greater responsibility for directly organizing investment.”


Directly organizing investment! Since when does the government have the ability to run a business on behalf of its citizens with efficiency and profitability? Think Post Office, FEMA, and Katrina.

Apparently, when you earn money after working hard, Keynes thinks you are too stupid to manage it yourself, and the government needs to take it from you and do something more productive with it. They believe that your money should be seized by the State through taxation, fees, fines, regulations, inflation and debased currency then redirected to serve the public under the wisdom of politicians and bureaucrats.

Folks, this is all the manifestation of a socialist agenda leading to some sort of one world government. As Christians, we must break free from economic illiteracy and challenge these mammon kings.