Lack Of Fathers Leads To Looters And Lawlessness 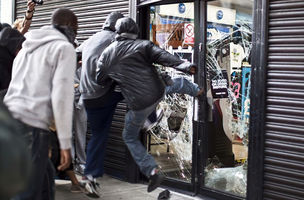 On Monday, May 25th in Minnesota, the murder of Mr. George Floyd by a Minneapolis law enforcement officer went viral on social media sparking a national protest in 200 cities and all 50 States against injustice and racism.Wikipedia writes,
"While Floyd was handcuffed and lying face down on a city street during an arrest, Derek Chauvin, a white American Minneapolis police officer, kept his knee on the right side of Floyd's neck for 8 minutes and 46 seconds; according to the criminal complaint against Chauvin, 2 minutes and 53 seconds of that time occurred after Floyd became unresponsive."
Four police officers present were fired but not immediately arrested. This angered thousands and fueled a national protest.
For the most part, the marches were peaceful and passionate but eventually looting and lawlessness in several cities began to take away from the positive message of the marches.
I looked up the word lawlessness in the dictionary. The definition was revealing. It stated that lawlessness is the result of a failed government. When you take a look at those breaking windows, attacking innocent store owners, and stealing, you have to ask the question, "Where are the fathers?" This is why I wrote the book, “Manhood, The Fight Is On.”
The first government in the Bible was the family. A family has a mother and a father. Today, thousands of houses are without fathers with children running the streets, acting crazy, without hope and direction.  We need a restoration of family government.
(c) Your partner,
Apostle Jonas Clark
www.JonasClark.com