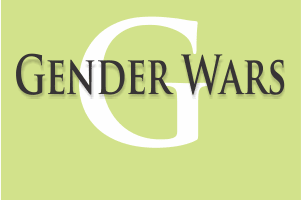 The gender wars have just begun, and Bible-believing Christians (and men) are in the way. The gender war movement is trying to make a third species. They are not satisfied with God's creation of the male and female.

Their introduction of new definitions of sexuality is a direct attack against God’s design. It is God that made the man and the woman.

Get ready for an escalation of false science with gender study after gender study ‘proving’ that thousands of years of male and female biblical history and design are old fashion and obsolete. I see also the use of discrimination laws and the threat of fines and perhaps even jail time to enforce a demonic agenda.

In a school in Britain, according to the Daily Mail, seventeen autistic children with mental health problems were being “tricked” into believing they were the wrong sex including one sixteen-year-old girl who was having a double mastectomy. They also reported 150 autistic teenagers given puberty blocker drugs to stop their bodies from maturing. (What’s happening in your child’s school?) Teachers are afraid to speak out. One teacher was reprimanded for saying only females can have a menstrual cycle.

Regarding this debauchery, God says, “Professing themselves to be wise, they became fools and changed the glory of the uncorruptible God into an image made like to corruptible man... Wherefore God also gave them up to uncleanness through the lusts of their own hearts, to dishonor their own bodies between themselves” (Romans 1:22-25).

The creation and design of man was God’s idea. To those lost in the dark sea of carnality and sin, God’s design is hateful, intolerant, unloving, non-inclusive, racists, discriminating, and abusive. And, for those that hold fast to the truth of the Genesis creation, they will be labeled as propagators of hate speech crimes against those that were “born that way.”

At the end of the day, God created the male and the female. Any other gender designation is not by him. God never created a third gender. “And God said, Let us make man in our image, after our likeness” (Genesis 1:26).

OUR FATHER IN HEAVEN

God Jehovah is not without gender, he is a male. His gender cannot be redefined by his creation. The pitiful destination of gender reassignment to the confused will end with destroyed lives without identity, meaning, and purpose. If the attack against man is not checked, it could very well collapse the western world’s cultural values as we have known them.

Yes, there is an assault on men, manhood, masculinity, and what it means to be a man. It is an attack against God’s design for the male and, ultimately society itself.

We need to remember that Christ gave us power against unclean spirits. Join with me and let's be that salt and light that Jesus called us to be.

(c)Thanks for your prayers and support.