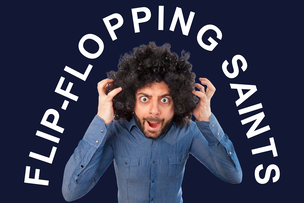 Some people wear flip-flops. Flip-flops are commonly known as sandals without a heel having a strap between the toes. They have been worn for centuries. Interestingly, these modified sandals are used to protect your feet when walking. Some Christians manifest a different kind of flip-flop. It's a flip-flopping lifestyle. These are called flip-flopping saints.

Sadly, flip-flopping is the kind of action that negatively affects their walk with God. This kind of flip-flopping is a change of mind. It's a decision to reverse an earlier decision. Flip-flopping faith seems common among some who say they believe God one day but easily change their minds the next.

Abraham refused to walk in flip-flopping faith. The Bible says, “He staggered not at the promise of God through unbelief; but was strong in faith, giving glory to God; And being fully persuaded that what he had promised he was able also to perform” (Romans 4:20-21).

Flip-flopping saints can never please God. Remember, faith cometh by hearing and hearing by the word of God. Don't let the seed of God's word fall on hard ground. Build your house on the rock. Scripture declares, “And these are they which are sown on good ground; such as hear the word, and receive it, and bring forth fruit, some thirtyfold, some sixty, and some a hundred” (Mark 4:20). God rewards steadfastness.

Watch your walk. As already said, be careful around flip-flopping saints. Stagger not in unbelief but give glory to God. Think about this. “God is not a man, that he should lie; neither the son of man, that he should repent: hath he said, and shall he not do it? or hath he spoken, and shall he not make it good?” (Numbers 23:19). Don't be like the flip-flopping saint.