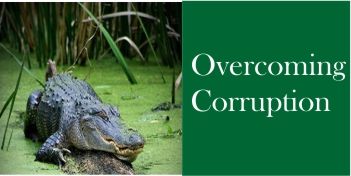 Moral integrity is necessary to overcome political and religious corruption. There has been much talk about "draining the swamp", meaning political corruption in the nation’s capital. Some think the Church swamp needs draining too.

Corruption is defined by a lack of integrity, such as honesty, and the use of a position of trust for dishonest gain. Religious corruption blocks Biblical truth and leads people into spiritual darkness and sin. Scripture says of this evil group of leaders, “But woe unto you, scribes and Pharisees, hypocrites! For ye shut up the kingdom of heaven against men: for ye neither go in yourselves, neither suffer ye them that are entering to go in” (Matthew 23:13).

The only thing that can match political corruption is religious corruption. Religious corruption is far worse because of its eternal consequences. Those with tainted character tell people what they want to hear, blend with political correctness, avoid controversial issues, and allow immorality to go unchallenged. These compromising leaders hinder hungry seekers of Biblical truth and freedom from the bondage of sin.

The most dangerous are ministry leaders that started off right in ministry but began playing with sin and diddling with deceptive skulduggeries such as inclusion, empathy, social justice, and affirming. Fearing rejection from people more than rejection from the Holy Spirit they broke rank and blended into a polluted culture of secular humanism and religious liberalism. One such error is the sufferance of homosexuality. Today they call it open and affirming. You can see that word appearing on church websites.

Inclusive evangelists promote acceptance of a lifestyle that God calls an abomination. “Thou shalt not lie with mankind, as with womankind: it is abomination” (Leviticus 18:22). No matter how you cut it, the word abomination means disgusting in the eyes of the LORD. These reprobates even double down on their apostasy saying the Holy Spirit affirms the homosexual lifestyle because that’s how God made them. Not only are these compromising church leaders proponents of sin, they take pleasure in it thus confirming the words of the Apostle Paul, “Who knowing the judgment of God, that they which commit such things are worthy of death, not only do the same but have pleasure in them that do them” (Romans 1:32).

There are some closet gay church leaders completely silent on sin hiding behind a hyper-grace doctrine similar to the once saved always saved theology. Some incorrectly say homosexuality is the same as any sin. Many do not agree because homosexuality is celebrated from coast to coast. When was the last time you saw adultery celebrated, taught in public schools as an alternative lifestyle, or worn as a badge of honor? Or the last time you saw a pin with the words “Adulterer Pride.” We have never seen a nation’s president celebrate homosexuality the way President Obama did by lighting up the White House with rainbow colors representing a victory for the Sodomite agenda. It’s interesting the lighting was already in place the day the Supreme Court ruled 5-4 for same-sex marriage. Notice how the liberal courts overturned the will of the people regarding the definition of marriage between one man and one woman.

Some of these closet gay ministry leaders have sex with others in ministry to limit their chances of getting exposed and losing their positions. Some are even married and don’t consider sex with another man adultery because it’s sex with a man and not a woman. These same leaders don’t consider homosexuality a sin needing repentance. Perhaps only adultery, embezzlement, or murder might qualify as something requiring repentance, but certainly in their delusion, not the LGBT lifestyle. By their standards of morality, the definition of holiness would need changing, and the prophet’s ministry of separating the holy from the profane no longer needed. All of this represents inhabitants of the ministry swamp. The good news is, Christ offered a way of escape on Calvary. The blood of Christ was shed for those seeking forgiveness, not acceptance, of sin.

The bottom line is this; forgiveness of sin by Christ follows repentance. “If we confess our sins, he is faithful and just to forgive us our sins, and to cleanse us from all unrighteousness” (1 John 1:9).

Words are identifying the entrance to the swamp. These words are inclusiveness, equality, affirming, socialism, social justice, environmental justice, tolerance, and empathy. Avoid these warning signs to the muck and the mire. Every pastor needs to remember that God gave a rod and staff. With the staff, he leads the congregation, and with the rod beats off the wolves.

A great division is taking place in the USA. This confirms Scripture. “Nation shall rise against nation, and kingdom against kingdom” (Luke 21:10).

“So what can we expect to come,” you ask? The Church swamp will get drained as the Holy Spirit separates the goats from the sheep and everything that can be shaken will be shaken.

It’s a Biblical truth, God will not be mocked. Whatsoever a man sows that shall he also reap. Sow to the flesh, and of the flesh, you will reap. The Catholic Church ignored the sin of homosexual pedophiles in their pulpits, and it cost them nearly $3 billion in the U.S. The cost of apostasy is far greater. “For the wages of sin is death; but the gift of God is eternal life through Jesus Christ our Lord” (Romans 6:23).