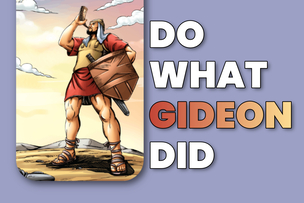 Words create an image of how you see yourself, others, and the world around you. Gideon had a terrible image of himself. Gideon lived in a time of Midianite oppression. Year after year they came during the harvest and plundered the people. The abuse was so bad the people hid in caves, dens, and strongholds. You can only imagine what it was like to work hard for a harvest only to have the fruits of your labor stolen by thieving marauders. Fear had replaced faith.

God called Gideon a mighty man of valor. Gideon didn't see himself that way. Some view their world the same as Gideon. They look at the size of their trouble, bank account, or family status instead of the size of their God.

God spoke saying to Gideon fear not. Words have meanings. There are faith-filled words and fear-filled words. Words are destinations. Words have power. Words tear down, throw down, destroy, build, and plant. Fear has never won a battle against faith.

Gideon’s image of himself had to change before he could do anything great for God. He needed to think of himself the way God thought of him. It's the same with us. All change starts with words. Change your language and change your life. Gideon became a great example for us.