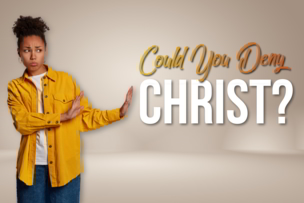 Could you deny Christ? Peter did. Not only that, he cursed him and swore he didn't know him. How is it possible to be a Disciple of Christ one day and curse him the next? Remember the day Christ was arrested? His Disciples couldn't believe it. They knew he was the King of Glory that would restore the Kingdom of God to Israel. But He didn't. (They were focusing on the Kingdom and missed the cross. Today we focus on the cross and miss the Kingdom. We need both.)

Christ was falsely accused, arrested, and dragged before the authorities facing charges of political sedition. The penalty? Death by crucifixion. Peter was among the Twelve and one of Christ's strongest supporters. He's the one that proclaimed, “Thou art the Christ, the son of the living God” (Matthew 16:16). When Christ was arrested Peter couldn't believe what was happening. Fear attacked him. He ran and hid, doing his best not to be discovered. One problem, he was spotted. "It's him," a damsel shouted. “I saw him with Jesus.” Peter, full of fear denied her accusation. "It's not me," he swore. "I never knew the man!" That's what you call denial. Jesus told Peter he would deny him three times. The once bold and outspoken apostle did something he never thought he would do, deny Christ. In Jesus's darkest hour his friend and close follower turned his back on him.

There are many interesting things to learn from this. When Peter turned his back on Christ, he turned away from his identity even swearing he never knew Jesus. We can't be too hard and judgmental of Peter. After all, many turn their back on Christ. What of those that hide when Christ, sin, and salvation are discussed at work or family gatherings? How many shrink back, refusing to take a stand, withholding their “Christian” identity? Maybe they won't curse and swear yet they deny him through silence.

When a person turns their back on God something happens. Their language changes. Their words change. Peter even swore. Others run and hide. Still, others shrink back trying to blend in with the crowd. Scripture says,

“Now Peter sat without in the palace: and a damsel came unto him, saying, Thou also wast with Jesus of Galilee. But he denied before them all, saying, I know not what thou sayest. And when he was gone out into the porch, another maid saw him and said unto them that were there, This fellow was also with Jesus of Nazareth. And again he denied with an oath, I do not know the man. And after a while came unto him they that stood by, and said to Peter, Surely thou also art one of them; for thy speech betrayeth thee. Then began he to curse and to swear, saying, I know not the man. And immediately the cock crew. And Peter remembered the word of Jesus, which said unto him, Before the cock crow, thou shalt deny me thrice. And he went out and wept bitterly” (Matthew 26:69-75).Christianity is not always easygoing while waiting for the rescue of the rapture. The Christian life is often full of contention and spiritual warfare fighting principalities and powers through faith, prayer, binding and loosing (Acts 14:22).

It's also about contending with the war of doubt and unbelief that challenges even the most spiritual among us.

Peter blew it that day but his failure gives glory to God and hope for us. Why? Because it reveals our weakness as human beings. Nevertheless, God says, “I will never leave you nor forsake you even to the end of the age” (Hebrews 13:5). Jesus knew what was going to happen with Peter that day. What about you? Could you deny Christ?