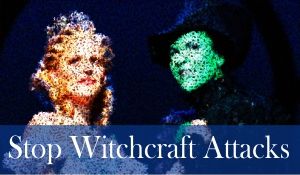 We all have some sense of what witchcraft is. Some equate witchcraft with Halloween, Jack-o’-lanterns, caped women atop broom sticks, Wicca, or even Dorothy’s Wizard of OZ archenemy. The best-selling books and movies chronicling the adventures of Harry Potter continue to sanction witchcraft in our society through casting spells and mixing potions while presenting a great saga between good and evil witches. And, of course, who could forget the ever so popular video game Dungeons and Dragons, the fantasy role-playing game where players engage dark forces with their magical powers.

Regardless of what some think, witchcraft opens the door to demonic forces. Package them in the latest fashion or present them on Hollywood’s silver screen, but there are no such things as good demonic powers. Jesus said, “The thief cometh not, but for to steal, and to kill, and to destroy: I am come that they might have life, and that they might have it more abundantly” (John 10:10). It would be best for all to take heed to His Word.

Witchcraft is a bonafide demonic power released through various activities such as words, spells, amulets, charms, occult powers, chants, magic, drugs, potions, or directive prophecies. It’s far more than meeting in a forest to worship Mother Earth and hugging pine trees. Witchcraft is a power that influences people, gives a place to demon activity, battles against the minds of men, challenges the Church of Jesus Christ, buffets the maturity of believers, hinders church growth, comes against families, marriages and relationships, and frustrates the advancement of the Gospel of Jesus Christ.

Witchcraft, however, is more common that one would think. I want to break away from the traditional look at witchcraft and explore some other manifestations of this evil force. I know a true born again believer would never cast a spell or drink a potion, but could there be other forms of witchcraft mentioned in the Bible? Let’s take a look at witchcraft operations from a different perspective, through the old fallen nature--the flesh.

Witchcraft can be released through the rebellious and the stubborn, both actions described in the Word of God as workings of the flesh. Scripture says,

“O foolish Galatians, who hath bewitched you, that ye should not obey the truth, before whose eyes Jesus Christ hath been evidently set forth, crucified among you? This only would I learn of you, Received ye the Spirit by the works of the law, or by the hearing of faith? Are ye so foolish? Having begun in the Spirit, are ye now made perfect by the flesh?” (Galatians 3:1-3).

Notice the words bewitched, spirit and flesh. The word bewitched, Greek baskaino, means to be charmed, seduced, or to be placed under a spell. In the Old English language bewitched comes from the word biwiccian, meaning the working or the result of Wicca sorcery. The writer of Galatians ties witchcraft to the manifesting or workings of the flesh. The meaning of flesh in this scripture is the Greek word sarx, meaning the carnal mind, or better described as the earthly nature of man apart from the Spirit of God. A person, therefore, who is “governed” by the actions of the flesh (sarx), can release witchcraft upon himself or others. No, he or she doesn’t become a Wiccan recruit, but, nevertheless, like the Galatians, enters into a foolish and illusory area of life.

Have you ever been around a person whose negative body language, tone of voice, stubbornness, or contentious attitude made you feel like you were walking on eggshells around them? Or his or her actions made you feel like he or she would lash out at you at any moment? Did you get a sick feeling in the pit of your stomach? Could that feeling be the result of a subtle form of witchcraft emanating from the flesh (sarx)? Even though nothing much was said, did you still feel some sort of force emanating from the person? Did you understand the nonverbal message? That subtle force from the flesh (sarx) is a form of witchcraft. The writer who corrected the foolish Galatians, the Apostle Paul didn’t stop there to make this plain to us. He said,

“Now the works of the flesh (sarx) are manifest, which are these; adultery, fornication, uncleanness, lasciviousness (unbridled lust), idolatry, witchcraft, hatred, variance (contention), emulations (jealous rivalry), wrath, strife, seditions, heresies, envyings, murders, drunkenness, revellings (evil carousing), and such like: of the which I tell you before, as I have also told you in time past, that they which do such things shall not inherit the kingdom of God” (Galatians 5:19-21).

Here Paul directly connects the works of the flesh with witchcraft, concluding that those who do (intentionally practice) such things shall not inherit the kingdom of God.

The works of the flesh, temper tantrums, bad attitudes, negative body language, stubbornness, and negative words and confessions are all workings of witchcraft. I told you this would be a different viewpoint on witchcraft. Now you can see why there is so much written in the Word of God about the tongue (Proverbs 18:21, James 3:6).

When religious activity is not spiritually motivated but carnally motivated it releases a form of witchcraft, too. Motivation is everything because its source is the heart of man.

Religion also releases witchcraft when it intentionally avoids the ministry of the Holy Spirit. scripture says, “Having a form of godliness but denying the power (dunamis) thereof: from such turn away” (2 Timothy 3:5). This is a powerful instruction to Timothy from the Apostle Paul. The word form, Greek morphosis, means to have merely a shape or to look like the real thing. This religious counterfeit can be identified because it looks like the Church, yet is carnally motivated and disregards the necessity of the dunamis power of God. That dunamis power is the ministry of the Holy Spirit Himself. Paul’s final instruction is to turn away from such.

There are many religious people in the world who say they are born again yet attack the ministry of the Holy Spirit. They challenge the baptism of the Holy Spirit, miracles, and healing today, speaking in other tongues, prophecy, deliverance, fervent prayer, the nine gifts of the Holy Spirit, and much more. Rather than have Holy Spirit administered lives, ministries, and churches, they hold fast to man-made programs, vain traditions, and secular social activities.

Religion releases witchcraft when it is governed by the flesh (sarx) rather than the Spirit of God. It was religious people, supposedly born again, that persistently stirred up trouble for the Apostle Paul. They couldn’t accept his teaching that it was possible to be born again without circumcision (Acts 15).

The elements of religion are a lack of spiritual sensitivity, legalism and debate, hypocrisy, self righteousness, and a form of godliness that denies the ministry of the Holy Spirit. Just get around a person who has that nasty, contentious religious spirit and you will experience the working of witchcraft from religion. If you want to know more about discerning religious spirits check out my book Spirit of Religion: The Unseen Thief.

Witchcraft, emanating from our flesh, is an enemy far greater that any Dorothy faced as she traveled the yellow brick road in search of the Wizard of OZ. The good news is that we can, through our love for Jesus Christ, crucify that old carnal nature. scripture instructs us to take off our old corrupted manner of living and put on the new man, which is created in righteousness and true holiness in God’s likeness (Ephesians 4:22-24). So the next time you experience the powers of witchcraft it may not be coming from some occult mystic, but from the Wizard of Sarx —the flesh.