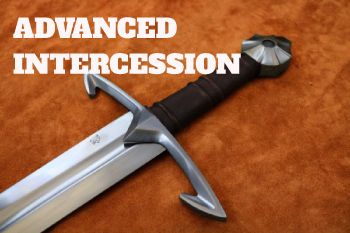 Reclaim the victory of Christ's resurrection and be empowered to take up the supernatural weapons of your warfare. Spiritual warfare prayers for protection, decrees, finances, healing, strongholds, deliverance, and warfare prayer Scriptures for the seasoned intercessor used to put on the armor of God against the rulers of darkness and evil spirits. Spiritual warfare warriors use the sword of the Spirit, the word of God.

Spiritual warfare prayers of an inercessor must have a firm grasp of this Scripture. "We know [positively] that we are of God, and the whole world [around us] is under the power of the evil one" (1 John 5:19 AMP). The evil one is Satan. Satan is a fallen angel, kicked out of heaven because of pride, covetousness, and rebellion. He wanted to be God instead of a servant of God.

Satan launched an uprising against God leading a third of God's angels into insurrection. They were all expelled from God's presence, falling in defeat to the earth. Satan leads these demons against the will of God in the invisible spirit world around us.

We first saw Satan in the Garden of Eden, a deceiving serpent challenging the Word of God to Eve (Genesis 3). Adam and Eve fall for Satan's deception and rebel against God's command not to eat of the tree of the knowledge of good and evil. Through Adam's rebellion, sin, corruption, physical and spiritual death, and every evil thing entered the world.

Sin is the reason wickedness surrounds us and Satan revels in it.

Spiritual warfare prayers are fighting against the plans of Satan, his demonic hosts of wickedness, and malicious attacks against someplace or someone. When the will of God and the will of Satan clash, that is where the spiritual battle begins. Victory belongs to those that embrace the redeeming blood of Christ and power of the Word of God. Christ's Word has complete dominion authority in heaven and earth. He demonstrated authority with many infallible proofs rebuking storms, walking on water, healing the sick, raising the dead, casting out demons, forgiving sin, and rising from the dead after three days.

Spiritual warfare is a direct conflict with demonic spirits, not flesh and blood. The seasoned intercessor knows the spiritual battle is not against people but rulers of darkness that manipulate people from within the unseen spirit world. This is why people make terrible decisions that hurt themselves and others.

You battle wickedness with the Sword of the Spirit, the Word of God. "For the Word that God speaks is alive and full of power [making it active, operative, energizing, and effective]; it is sharper than any two-edged sword, penetrating to the dividing line of the breath of life (soul) and [the immortal] spirit, and of joints and marrow [of the deepest parts of our nature], exposing and sifting and analyzing and judging the very thoughts and purposes of the heart" Hebrews 4:12 AMP).

You protect yourself by putting on the armor of God such as the shield of faith that quenches all the fiery darts of the wicked (Ephesians 6:16). Victorious spiritual warfare begins in the resurrection power of the Holy Spirit and the power of prayer. Because of the Cross, sin lost its power over you. You are free from condemnation and empowered to take up the supernatural weapons of your warfare. "Knowing this, that our old man is crucified with him, that the body of sin might be destroyed, that henceforth we should not serve sin" (Romans 6:6). When you are born again you leave spiritual death and enter spiritual life with Christ Jesus, old things passed away, behold all things become new. You are a new creature (2 Corinthians 5:17).

Because of Christ's victory on the Cross, you have the power to tread on serpents and scorpions and over all the power of the enemy and nothing by any means shall hurt you (Luke 10:19).