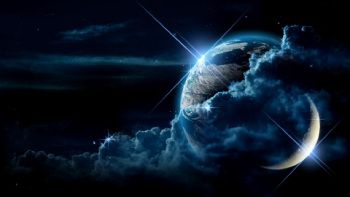 Over the last few years, I have noticed an increase in spiritualism trying to operate in churches. Just because something sounds spiritual doesn’t necessarily mean that it is of God. Just because someone says, “Thus saith the Lord, or I saw this, or I heard that” doesn’t mean that it is the Spirit of God they heard. It could be another spirit. It is essential for Christians to understand the difference between spiritualism and the Holy Spirit.

A spiritualist operates inside the spirit realm unlawfully with help from familiar spirits. The closer we get to the end of the age the more we will see an increase in spiritualism. We already see people using occult Kabbalah practices, for example, to prophesy using symbols and numbers.

The devil of spiritualism likes to hang out in church because that is an area where it can express itself. Those that have the most contact with spiritualism are those who operate in prophetic ministry. There are some that want to flow prophetically in what I call dark sayings. They are not called by the Holy Spirit but chase spiritual experiences fueled by pride. They want to operate in prophetic ministry to be seen of men. Apostle Peter wrote about it.

“Follow after charity and desire spiritual gifts but rather that ye may prophesy. For he that speaketh in an unknown tongue speaketh not unto men, but unto God: for no man understandeth him; howbeit in the spirit he speaketh mysteries. But he that prophesieth speaketh unto men to edification, and exhortation, and comfort.” (1 Corinthians 14:1-3)

This verse is an excellent key to understanding prophetic utterances. Prophecy should edify and build up its hearers. It should not release instability or confusion. Whatever God reveals, one should be able to understand. Prophecy should build and strengthen you to fight the good fight of faith. It should be the fuel that strengthens you and encourages you to keep on going.

Prophecy should give you a knowing in your heart and not a wondering in your head. We have heard some ask, “I wonder what that prophetic word meant?” Some prophecies are so unclear they could mean fifty different things. Our God is not a flake. He is capable of making himself clear. Prophecy should encourage the hearer with divine exhortation and comfort. If it doesn’t, then it’s not prophecy. True prophecy builds up and never feeds the spiritual pride of others.

14 EARMARKS OF A SPIRITUALIST

Spiritualism is the counterfeit of the Holy Spirit. Let’s look at fourteen earmarks of a spiritualist by Apostle Peter.

The first earmark of a spiritualist is private ministry. They will try to isolate you from others. Their prophetic operations are ‘too deep’ for everyone in the church except their victims. They look for those they can prophesy to privately. At some point, these operators of spiritualism will work their way into false doctrine through so-called prophetic operations.

“And many shall follow their pernicious ways; by reason of whom the way of truth shall be evil spoken of.” (2 Peter 2:2)

“Pernicious ways” lead to spiritual destruction. Perniciousness will cause:

Those that fall prey to spiritualism learn to follow the ways of the spiritist (the false prophet). They even go so far to dress alike, wear their hair the same way, and all their mannerisms look the same. Even their accents sound the same. False prophets make cookie-cutters of themselves. When you look closely at their lives, you will find a trail of damaged relationships and people they have hurt severally.

“And through covetousness shall they with feigned (invented) words make merchandise of you: whose judgment now of a long time lingereth not, and their damnation slumbereth not.” (2 Peter 2:3)

The word “feigned” means unbelievable stories, wild exaggerations, and deceit. Those operating in spiritualism use manipulation and control through false prophecy to merchandise people. They will use smooth prophetic utterances to get you to do their will. There are those who will say that they saw or heard something from God and prophesy with underlying motives to merchandise you. Prophetic control is the worst of evils.

“But chiefly them that walk after the flesh in the lust of uncleanness” (2 Peter 2:10).

Spiritists are unclean immoral and unfit. The Greek word for “uncleanness” is miasmes meaning the act of defiling or polluting. Not only are they defiled but they choose to pollute you as well.

Those who walk in spiritualism despise governments. To “despise” means to think little or nothing of. They say things like, “I am submitted to the Holy Spirit only, and I will only do what He says.” Their rebellion drives them to attack all in authority. The Holy Spirit seems to take them all over town, and they never plug into any local church. They are accountable to no one.

Spiritists despise God’s five-fold government. They say things like, “Don’t you dare tell me what to do! I can worship God my own way. I have a ‘home’ church. I had someone from India lay hands on me and confirm me a pastor. Who does that pastor think he is? I’m going to run to this conference and that meeting, and I am going to get sister so-and-so to lay hands on me and prophesy smooth sayings over me and tell me how wonderful I am. I will never allow that apostle to bring correction in my life.”

A presumptuous person is bold and forward. They take too much for granted and have an overconfident and arrogant air about them. They are full of self-will and say to themselves, “I’m not going to crucify my flesh because I am my own god.” One controlled by self-will is his own god. It means that he can do anything he wants to, at any time he wants to.

Spiritualists are self-centered and answerable to no one. Those who operate out of spiritualism will not be submissive unless it’s worthwhile to them. A presumptuous prophet is one that thinks he should prophesy just because he can. Those who are into spiritualism do things at their own will, without the unction (permission) of the Holy Spirit. If you don’t have the unction, don’t prophesy.

Five-fold ministry gifts are given spiritual and natural authority. Those that flow in spiritualism are not afraid to sit around the coffee table and talk evil of their ministers. “I just didn’t get a witness about that minister. He’s into hyper-faith and spiritual warfare. Who does he think he is?” Spiritualism likes to take the devil’s lies and pass them out to everyone. Those involved in spiritualism build their own disciples outside the local church.

“But these, as natural brute beasts, made to be taken and destroyed, speak evil of the things that they understand not; and shall utterly perish in their own corruption.” (2 Peter 2:12)

>Spiritist try to make others think they are real deep, spiritually. I heard a woman say one time to another, “You are so deep in the spirit. I just don’t know how you get back when you get out there so far.” Spiritists are phony pretenders.

“And shall receive the reward of unrighteousness, as they that count it pleasure to riot in the daytime. Spots they are and blemishes, sporting themselves with their own deceivings while they feast with you.” (2 Peter 2:13)

The spiritist plays a game of deceit and cannot even be honest with himself. He sports about bragging about how much he is involved in and how wonderful he is. This reminds me of a peacock that would visit my backyard. He would spread his tail feathers and sport himself around the yard. As he fanned his feathers, he would frolic himself about, acting like the yard belonged to him.

Those operating in spiritualism have some problem with sexual sin and cannot stop sinning because their hearts are full of lust.

Those who are into false operations look for unstable souls. People that are not stable are those who are not submissive or plugged in and have trouble remaining stable. They might be real melancholy or real “woe is me,” even schizophrenic. But they are those who struggle in the soulish realm. Your soul is your will, mind, emotions, intellect, reasoning, and imagination.

Spiritists look to create soul ties. They will play on what’s hurting you and bothering you. Just remember you can’t flatter a stable person. The compliment we want is when Jesus says, “Well done thou good and faithful servant” (Matthew 25:21).

“…a heart they have exercised with covetous practices; cursed children.” (2 Peter 2:14)

This spirit is after your possessions saying, “If I could just have your money, your husband, your ministry, your, etc.” A pastor told me that he overheard someone saying, “It would be nice to be a pastor’s wife.” The problem was that this woman was already married. Her statement was made out of the wrong spirit.

“Which have forsaken the right way, and are gone astray, following the way of Balaam the son of Bosor, who loved the wages of unrighteousness; but was rebuked for his iniquity: the dumb ass speaking with man’s voice forbad the madness of the prophet. These are wells without water, clouds that are carried with a tempest; to whom the mist of darkness is reserved forever.” (2 Peter 2:15-17)

Spiritists try to make it happen or work things up. You don’t have to help God. The Holy Spirit knows what He’s doing. Balaam was taken captive by the idolatry in his heart and became a merchandiser of the anointing.

“For when they speak great swelling words of vanity, they allure through the lusts of the flesh, through much wantonness, those that were clean escaped from them who live in error.” (2 Peter 2:18)

Spiritists lure others through the lust of the flesh saying things like, “God wants to make you a big man.” They know how to feed your spiritual pride and pull on any common ground that you might have through the lust for things.

“While they promise them liberty, they themselves are the servants of corruption: for of whom a man is overcome, of the same is he brought in bondage.” (2 Peter 2:19)

With every great move of the Spirit, there is a time of preparation and understanding of how to relate, flow, and function in that gifting. We should come to the conclusion that even though we can prophesy by faith, we need to examine our motives before the Lord and wait for the safety of an unction of the Holy Spirit.

One final thought. If the people of God do not respond properly to God’s prophetic flow and they try to use prophetic gifting for self-advancement, manipulation, merchandising, and control, or if the prophet’s office is coveted only for personal prophecy then I believe prophetic ministry will be impeded severely, and many will become discouraged and some even lost. But if the church will allow the prophetic gifting to function the way God designed it, then the Church will prosper and continue to grow in that which only the prophetic anointing provides.