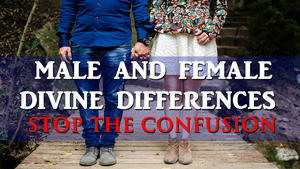 A lack of understanding of these differences can lead to design malfunctions and frustration in relationships. It is important to remember that God's design of the male and female complements each other as a reflection of His glory.

It’s impossible to escape God’s design for mankind with both biological and spiritual differences. Regardless of the modern gender confusion, God designed the male and female species and there is no third gender.

Staying within the biblical understanding of God’s creation, let’s review the differences between the male and female. Men and women were created both different and equal. A man is not greater than the woman because he is a man and the woman is not less than a man because she is a woman. Both male and female are called by God with equal value but distinct differences.

The male and female need to know their differences between each other. When you don’t see the difference between one another, you can have lots of frustration in your relationships. You see, love is not the foundation of a relationship. In other words, love doesn’t hold marriages together. Understanding and trust hold marriages together. I have done lots of marriage counseling. Sometimes the woman will say, “I still love him, but I can’t live with him anymore.” The man will say, “The woman doesn’t appreciate how hard I work.” This conflict finds its roots in the lack of understanding of difference.

The male and female are magnificent creations of God. They complement each other as a reflection of the glory of God. One of the most outstanding features of God’s design of the male and female is their ability to complete one another and rule together as one.

Two of the most significant differences between the male and female deal with respect and love. The man needs respect, and the woman needs love. When a woman doesn’t respect a man, he will shut down emotionally and find a woman that does respect him. That’s because the need for respect is in his nature. When a woman doesn’t feel loved, she will shut down and look for love through her children or from another man.

The man needs to feel important, honored and respected by his wife. Respect is like a tailor-made suit to the man. Apostle Paul wrote that the wife should “respect her husband” (Ephesians 5:33). Respect is a core need of the man. Some women love their husbands but don’t respect them. A lack of regard can open the door for many relationship problems.

Love does not turn the man on. It’s easier for the woman to love a man than appreciate a man. God knew that. That’s why He gave male and female relationship instructions. The woman needs to understand what respect is about. Respect deals with honor, honoring the man’s position as protector, provider, leader, husband, and father.

God says to the man, "Husbands, love your wives, even as Christ also loved the church, and gave himself for it" (Ephesians 5:25). Notice God didn’t say anything to the man about respecting his wife. His instruction was to love your wife as Christ loved the church. Knowing what love means and how to show it is where some men have problems.

To the woman, love takes center stage and is expressed through affection. Affection has elements of intimacy, caressing, cuddling, hugging, touching, and kissing. This is not about sex, but loving affection toward your bride, wife, and mother of your children. As already said, two of the most significant differences between the male and female deal with respect and love.

Men and women are biologically different. A man does not have a womb or menstrual cycle. That’s never going to change despite the gender-neutral and non-binary apologists.

One of the most profound distinctions between the male and female is the womb. A woman has a womb. The man does not. The womb is the place of conception, incubation, and birthing. The womb is known as the woman’s reproductive system. Reproduction means producing new life. She is the only one that can conceive and birth another human being.

The ability of the woman to give back more than she receives is essential for the man to discern. The woman was designed to take from the man and increase it. This means men, if you frustrate the woman, she will cultivate frustration and give it back to you. But if you give her your vision, she will cultivate vision and help you achieve it.

Here are just a few fun differences between the man and the woman.

*The male is analytical. The female is intuitive.

*The male is the giver. The female the receiver.

*The male has physical strength. The female has influence.

*The male is logical. The female is emotional.

*The male has sperm. The female has an egg.

(To the woman, facts are important if they "feel right.")

*Women choose their blouses before their pants.

*Men choose their pants before their shirts.

To men, when shopping, good customer service means getting out of the store fast.

To women, good customer service is helping find matching shoes and accessories that are on sale.

Women know the difference between the color purple and the color eggplant.

To a woman, Forest Green has nothing to do with the forest. This drives men crazy.