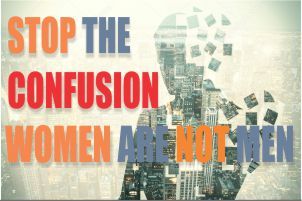 God's design for the man and the woman is now considered hate speech by multi-billion-dollar companies and the genderqueer movement. Social media giant Facebook and Twitter have enabled the genderqueer movement by introducing multiple gender options, flagging tweets from prominent feminists, and suspending accounts. California has allowed third gender designations for birth certificates and driver's licenses.

Genderqueer activists have even established an International Non-binary Day. These new terms describing a third species such as genderqueer have been declared by activists to be a movement to end gender discrimination in society. The spiritual battle against genderqueer apologists is raging and God is able to turn it around.

Facebook, the world’s largest social media company, disagrees with biology. In the past, when a person signed up for a Facebook account, “male” and “female” were the only options. In 2014, Facebook introduced 50 new gender options for one to select, including intersex, gender nonconforming, non-binary, and androgynous.

These are all new definitions of sexuality created in the minds of reprobates. To them, God’s name of male and female is not enough.

In 2018, Twitter, another social media giant, flagged several tweets from a prominent Canadian feminist as “hateful conduct” that violated Twitter’s rules. The tweets stated, “Women aren’t men.” And, “How are transwomen not men?” And “What is the difference between a man and a transwoman?” Saying such things, according to Twitter, was “hateful conduct” and they deleted the tweets and suspended her account.  This is prophetic. Twitter has joined the PC cult and defenders of reprobate “third species.”

California, under the leadership of Democrat Governor Jerry Brown, became the first state in 2018 to allow third gender designations on birth certificates and driver licenses.  The truth is, God has never made a third gender. There is no such thing!

Speaking of new terms describing a third species is the word genderqueer. Genderqueer is a new term for those that refuse to identify themselves as being male or female in the biblical and scientific definition. To them, gender neutrality is a movement to end “gender discrimination” in society by using gender-neutral language and the end of “sex segregation.” They teach that words such as he, him, his, policeman, chairman, businessman, mailman, or salesman are offensive.

LAVENDER, WHITE, GREEN
The Genderqueer apologists and activists have declared July 14th to be International Non-binary Day. This is for those that can’t make up their minds what gender they are. Genderqueer even have their very own lavender, white, and green flags.

According to Wikipedia, “Many flags have been used in the genderqueer community to represent various identities. The genderqueer pride flag, for example, was designed in 2011. Lavender represents androgyny (two sexes in one) or simply queerness, white represents a gender identity, and green represents those whose identities which are defined outside the binary.”

Biology is no longer relevant to these multi-billion-dollar companies or the genderqueer movement. To them, agreeing with God’s design for the man and the woman is considered hate speech.

God said there was coming a day when He would give them over to a reprobate mind.

“For this cause God gave them up unto vile affections: for even their women did change the natural use into that which is against nature: And likewise also the men, leaving the natural use of the woman, burned in their lust one toward another; men with men working that which is unseemly, and receiving in themselves that recompence of their error which was meet. And even as they did not like to retain God in their knowledge, God gave them over to a reprobate mind, to do those things which are not convenient” (Romans 1:26-28).

The spiritual battle is raging. Nevertheless, God is able to turn it around. Christ gave us the power of the Holy Spirit to minister the Gospel of the Kingdom of God, to be salt and light in a dying world, and authority against unclean spirits.