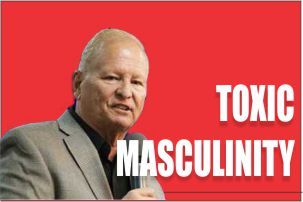 What is Satan up to? Is there a big push to undermine traditional values because of massive idolatry? The radical feminist and transgender homosexual movement is attacking traditional definitions of masculinity and replacing them with gender inclusive, non-binary, and gender nonconforming terms. This demonic agenda is a high level spiritual warfare meant to redefine the male and female species based on reprobate feelings rather than scientific biology and the word of God. In response, people must pray and use their voice to push back against wickedness, while pastors and church leaders must stand up for God and contend for the faith.

There is a full-blown assault on what it means to be a man by radical feminists and transgender homosexuals. Some say masculinity is toxic and offensive and may hurt the feelings of some women, transgenders, and non-binary people. This attack is really against God’s design of man, woman, family, and ultimately society itself.

Traditional words that once described the male and female species are being replaced, and new words are sprouting up everywhere. Maybe you have heard some of them. Words like gender inclusive, non-binary, and gender nonconforming. These terms are new to us because we are satisfied with the old fashion terms like men and women.

You must wonder why there is such a demonic rage against men, family, and sexual identity. What is Satan up to? Is there a big push to undermine traditional values because of massive idolatry? Is it a gap in the hedge because of apathy, lukewarmness, or sin? Is it because God’s prophets have forgotten to separate the holy from the profane?

I believe there is a demonic agenda.

In fact, I have never seen such a demonic rebellion against the things of God. Have you? We have seen spiritual warfare before, but this is high level spiritual warfare manifesting all around us. The odious intent of these evil spirits is to redefine the male and female species based on reprobate feelings rather than scientific biology and the word of our Creator. These reprobates are trying to get society to validate what God says is abomination.

Sex is determined at birth. It’s a scientific fact, if a baby has XX chromosomes, a female is born, and if a baby has XY chromosomes, a male is born. There is no escaping this truth without demonic deception. No doubt that statement will anger the non-binary gender confused because it’s a rebuttal against the politically correct language of our day. If we are going to find the truth, however, we must not be afraid to offend the PC cult.

This is utter wickedness and there is a special place in hell for those that would condone such shedding of innocent blood. The lie is that women have the right to kill their babies even after they are born. Afterall, “It’s their choice.” Where I am from, we call the killing of innocent babies’ murder. (I would like to know about the father’s rights in these decisions too? Again, the fathers, men, have no say in the matter.) The standards of justice in our country are in disarray. The shedding of innocent blood brings a curse on the land. It’s amazing, you can be put in jail for animal cruelty but it’s okay to murder a baby. This is evil beyond measure.

How wicked have some in our nation become? When it was revealed that Planned Parenthood was selling baby body parts and Congress did not defund them immediately, it was an assault against God Almighty. It revealed the complicity of our national leaders. These are the ones we-the-people voted into office. My God! Right now, our politicians (and preachers) seem spineless. Admittedly, the blood of the innocent is on the hands of some and God will repay.

It’s time for good people like you to be the voice for those that have no voice, to stand in the gap, and make up the hedge. Decree the word of God to a backslidden national leadership. We must, again I say must, beat our plowshares into swords and fight for God’s truth. His kingdom come and His will be done.

All this confirms that western culture, (made up of Christian values) is disintegrating around us. When a nation turns its back on God what's left?

What should we do? First, pray. Second, use the voice God gave you to push back against this wickedness. Don’t let evil doers proceed without challenge.  Use social media, for example, such as Facebook, Twitter, and Instagram. Use those platforms for the glory of God. Share the truth with your family, friends, and coworkers. Don't be afraid. Speak out. The other thing that needs to be done is in the hands of the Church, not Washington DC politicians. Every pastor and church leader in America need to engage this wickedness. If you are not standing up for God and contending for the faith, then ---- QUIT!

“What’s coming,” you ask? I’m expecting God to increase the shaking. Everything that can be shaken is being shaken. I say, shake on God. Let the wicked be exposed for who they really are, servants of unclean and murderous spirits. Let God arise and his enemies be scattered!