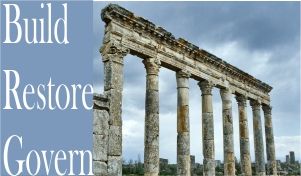 That nature is relevant to understanding your purpose. The nature of the Church is apostolic and can be found in three words: build, restore, and govern. These three traits are in every born again believer. Understanding these will empower you to do great things for Christ.

Jesus preached the Gospel of the Kingdom. That's not all He preached, but that is what keeps reoccurring throughout His ministry. When you understand Jesus, you will understand His ministry teaching about the kingdom. From the opening announcement of His ministry in Mark 1:16 and to His departure in Acts 1 His ministry dealt with the kingdom of God.

When you grasp the nature of Christ's ministry, to build, restore, and govern, you can grasp the nature of your ministry. Don't get confused here because you will never be the Lamb of God that taketh away the sin of the world. In that sense, there is only one Lamb. No other sacrifice for sin is needed. You are, however, able to continue the agenda of Christ found in His apostolic nature to build, restore, and govern. We know that Jesus was apostolic (Hebrews 3:1) and a sent one. He was sent (apostello), not only to offer himself as the Lamb of God, but also to bring reconciliation to the world (2 Corinthians 5:19).

When I was a young man we weren't taught about Christ's ministry to reconcile the world, we were taught about reconciliation of man to God through the atonement of sin. That's all fine and important except we need also understand the mission of Christ to establish His kingdom on the earth too. We know establishing the kingdom was important to him because Jesus told his followers to pray, “Our father which are in heaven hallowed be thy name, thy kingdom come, thy will be done, in earth as it is in heaven.”

Again, the only reference I had of Christ's ministry in my early years was His ministry as the Lamb of God culminating at the cross of Calvary when He said, “It is finished.” It might have been the same for you too. And because of that I missed Christ's ministry of the kingdom. This is significant. If we focus only on the cross (I'm certainly not discounting that) we miss the teaching about the kingdom and if we focus only on the kingdom we miss the cross. Both are important. Both bring definition, balance, and help us understand our purpose.

Let's look more at the apostolic nature of the Christian. Jesus asked His disciples who men thought he was. Only one responded that Jesus was the Christ, Peter. Jesus said that insight was given to Peter by direct revelation. Revelation is important to all because revelation always brings increase. The revelation of the Christ came from the Father. That same revelation of Christ is vital to us today. The greater your revelation of Christ the more likely you are to be effective in life and ministry. All of us are challenged in this area because all of us have various images of Christ. When Christ is mentioned there are many varying images in the minds of believers. To some, for example, Christ is the lamb, others a humble man surrounded by children, still others see him as a revolutionary warrior. How we see Christ determines what we do with our lives. When we see him for whom He is then we will also partake in His apostolic nature.

We rightly believe that Jesus is the revolutionary Lamb of God. Not only did He offer himself as a sacrifice, but He also determined to build a Church, His Church that would reconstitute His kingdom on the earth. To accomplish this goal God calls many sons and daughters working with him to turn the world upside down. Scripture even says the kingdoms of this world have become the kingdoms of our God. To accomplish this requires revelation of Christ. It was the same with all the apostles of old. First came the revelation of the Christ and then came the joining with His mission to build His Church. That Church is still here some two thousand years later. In fact, of the increase of His government and peace, there shall be no end.

Jesus said that man should not live by bread alone, but every word of God. In the Greek, there are two words for the English word – word. The first is logos. Logos means the written word of God. The second is rhema. Rhema is the life given word of God. It is the revealed word, or revelatory word. Therefore Jesus was saying man shall not live by bread alone but by every revelation, revealed Word. Revelation brings enlargement. By revelation Jesus said He would build His Church and by revelation He will build your life.

For us to accomplish our purpose in this life, we must believe for revelation of Christ. To understand Him is to understand your calling. When we do we understand what He meant when He said, “I will build my Church, and the gates of hell shall not prevail against it.” Notice He uses the phrase “build my Church.” Part of the apostolic nature of Jesus was to build. Not just build any old thing, but to build His Church, and to build it by revelation. Then He continues with the declaration, “And the gates of hell shall not prevail against it.” The gates of hell refer to spiritual opposition by demonic government. As Christians, we are involved in a spiritual war for dominion. The devil doesn't want to give up this world without a fight. Nevertheless, at the name of Jesus every knee must bow and every tongue confess that Jesus Christ is Lord. James said to submit yourself to God, resist the devil, and he would flee. As a member of the body of Christ, you are unstoppable. You are part of a royal priesthood of kings that Christ gave authority to rule on His behalf.

The Apostle Paul called these opposing spiritual forces principalities and powers. All natural and spiritual warfare battle over who is going to govern. When Jesus launched His ministry, He said the time is fulfilled, and the Kingdom of heaven is at hand. Repent ye and believe the Gospel. In this we discover Christ announcement. He was declaring the beginning of the greatest revolution of all time. I wrote about this in my book “Kingdom Living.” He was referring to the reconstitution of His kingdom right here on the earth. When He said repent, He wasn't talking about repenting of one's sins, but of changing how you think. If you want to change your life, you must change the way you think.

For some changing how they think can be problematic. Years of religious teaching can build strongholds within our mind as we struggle to see Christ for who He really is. He is not only the Lamb of God that taketh away the sins of the world, He is also God Almighty. The Apostle Paul understood the need for spiritual revelation of Christ. He wrote, “The eyes of your understanding being enlightened that ye may know what is the hope of his calling, and what the riches of the glory of his inheritance in the saints and what is the exceeding greatness of his power to us-ward who believe, according to the working of his mighty power which he wrought in Christ when he raised him from the dead and set him at his own right hand in the heavenly places far above all principality and power, and might, and dominion, and every name that is named, not only in this world, but also in that which is to come: And hath put all things under his feet, and gave him to be the head over all things to the Church” (Ephesians 1:18-21).

We need to agree with Paul's prayer because we need that revelation. When we see Jesus for who he really is, Christ the Restoring King, we will grasp His apostolic nature, to build, restore, and govern.