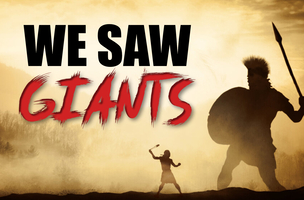 The Promised Land was just what God said it would be. It was prosperous beyond anything they could have imagined. There was only one problem. “And there we saw the giants.”

Scripture says, “And there we saw the giants, the sons of Anak, which come of the giants: and we were in our own sight as grasshoppers, and so we were in their sight” (Numbers 13:33).

Giants try to introduce fear. Fear is an expectation of pain, danger, or loss. Nevertheless, fear affords you the opportunity to run or fight. Remnant believers fight.

“You come to me with a sword, and with a spear, and with a shield: but I come to you in the name of the LORD of hosts, the God of the armies of Israel” (1 Samuel 17:45). Jehovah is not afraid of giants! He does not fear what you fear.

Here are two different ways to see a giant.

The children of Israel wandered in the wilderness for forty years until it was time to enter the Promised Land. The Giants were not in the wilderness, they were at the entrance to God’s promised blessing. When you see a giant, rejoice. You have arrived at your next breakthrough.

David was sent by his father to see how his older brothers were doing. When he got to the battlefield, Goliath was challenging the army of God and releasing fear in God’s mighty men. When David heard the words of Goliath he said, “Who is this uncircumcised Philistine, that he should defy the armies of the living God?” The soldiers told David the man that was able to kill Goliath would be rewarded. “What was the reward,” you ask? “The king will enrich him with great riches, will give him his daughter, and make his father's house free in Israel” (1 Samuel 17:25).

This is significant, where you see a giant you find the king’s treasure.

You will always act like the person you think you are. Those called to spy out the Promised Land saw the giants bigger than Jehovah. They had been set free from Egyptian slavery, but slavery was still in them. “As a man thinketh in his heart so is he.” Like you, David was different. He wasn’t like everyone else. He saw Jehovah as bigger than any giant. He said, “Who is this uncircumcised Philistine?” This Philistine has no covenant with Jehovah.

As already said, how you see yourself is important because you will always act like the person you think you are. Giants are not your problem. Christ is bigger than any giant. “The people that do know their God shall be strong, and do exploits” (Daniel 11:32).