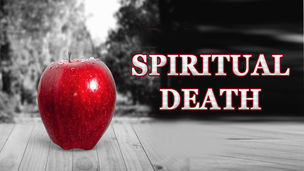 Let’s review the devastation of sin on the relationship between the man and the woman. What you are about to read is the result of outright rebellion against God.

Sin. Not only did Eve eat of the Tree of the Knowledge of Good and Evil, she gave to her husband and he did eat.

“And the eyes of them both were opened, and they knew that they were naked, and they sewed fig leaves together and made themselves aprons. And they heard the voice of the LORD God walking in the garden in the cool of the day: and Adam and his wife hid themselves from the presence of the LORD God amongst the trees of the garden. And the LORD God called unto Adam, and said unto him, Where art thou? And he said, I heard thy voice in the garden, and I was afraid because I was naked, and I hid myself.” (Genesis 3:7-10)

The day Adam and Eve rebelled against God they entered spiritual death and their relationship with each other changed. Here is a short list of things that entered the Earth.

“They knew that they were naked.” Suddenly, there was an awareness that they were naked This released a painful emotion of guilt and dishonor that resulted in a recognition of inadequacy. Not only did they feel shame, but they were fearful of God and hid. And the LORD God called unto Adam, and said unto him, Where art thou? And he said, I heard thy voice in the garden, and I was afraid because I was naked; and I hid myself. And he said, Who told thee that thou wast naked? Hast thou eaten of the tree, whereof I commanded thee that thou shouldest not eat? And the man said, The woman whom thou gavest to be with me, she gave me of the tree, and I did eat. And the LORD God said unto the woman, What is this that thou hast done? And the woman said, The serpent beguiled me, and I did eat.” (Genesis 3:9-13)

When God asked Adam and Eve if they ate from the tree, Adam threw Eve under the bus. Instead of taking responsibility for his actions, he blamed his rebellion on his wife. He said, "She gave me, and I ate." You can only imagine how Eve felt. Here, for the first time, blame entered the Earth.

You can only imagine how Eve felt when her husband blamed her for his sin. I’m sure she felt betrayed and her trust in Adam was violated. All relationships are built on trust. Lack of trust entered the marriage. Instead of Adam covering and protecting his wife, he blamed her for his rebellion.

ecause trust was violated, Eve tends to manipulate and control through influence. Adam’s betrayal opened the door for the Jezebel spirit. Instead of the woman trusting in her husband, she says in her heart, “I will never let someone hurt me like this again. I will take control of my own life.”

A TWISTED PERCEPTION OF PURPOSE ENTERED THE EARTH

No longer completely one. Their relationship was fragmented. They were designed to rule together in unity.  Unity is Satan’s enemy. Scripture declares, “If two of you shall agree on earth as touching any thing that they shall ask, it shall be done for them of my Father which is in heaven” (Matthew 18:19).

A SINGLE ACT OF REBELLION

Eve was deceived and gave of the fruit to Adam, who willingly ate. A single act of rebellion against God’s instruction opened the door for every evil thing and changed the relationship between husband and wife. From that willful act to disobey God spiritual death entered the world resulting in the surrender of the kingdom of God to the leadership of Satan. It was catastrophic. Much is blamed on God that should be blamed on Adam. God’s not the author of blame, fear, abuse, or divorce. All of these are the results of sin.

“And the LORD God said unto the woman, What is this that thou hast done? And the woman said, The serpent beguiled me, and I did eat. (14) And the LORD God said unto the serpent, Because thou hast done this, thou art cursed above all cattle, and above every beast of the field; upon thy belly shalt thou go, and dust shalt thou eat all the days of thy life: (15) And I will put enmity between thee and the woman, and between thy seed and her seed; it shall bruise thy head, and thou shalt bruise his heel. (16) Unto the woman he said, I will greatly multiply thy sorrow and thy conception; in sorrow, thou shalt bring forth children, and thy desire shall be to thy husband, and he shall rule over thee. (17) And unto Adam he said, Because thou hast hearkened unto the voice of thy wife, and hast eaten of the tree, of which I commanded thee, saying, Thou shalt not eat of it: cursed is the ground for thy sake; in sorrow shalt thou eat of it all the days of thy life; (18) Thorns also, and thistles shall it bring forth to thee; and thou shalt eat the herb of the field; (19) In the sweat of thy face shalt thou eat bread, till thou return unto the ground; for out of it wast thou taken: for dust thou art, and unto dust shalt thou return. (20) And Adam called his wife's name Eve; because she was the mother of all living. (21) Unto Adam also and to his wife did the LORD God make coats of skins, and clothed them. (22) And the LORD God said, Behold, the man is become as one of us, to know good and evil: and now, lest he put forth his hand, and take also of the tree of life, and eat, and live forever: (23) Therefore the LORD God sent him forth from the garden of Eden, to till the ground from whence he was taken. (24) So he drove out the man, and he placed at the east of the garden of Eden Cherubims, and a flaming sword which turned every way, to keep the way of the tree of life.” (Genesis 3:13-24)

God had no choice but to banish Adam, his most excellent creation and friend, from the Garden of Eden lest he eat of the Tree of Life and remain in a corrupted and sinful state forever separated from communion with God.

SIN IS A SPIRITUAL PROBLEM

The Serpent deceived Eve through conversation, and she passed her deception along to Adam. Through rebellion against God’s word sin entered and threw the world into spiritual chaos.

The rebellion against God's command was a willful choice by a couple living in the Spirit. This is why sin is a spiritual problem. Thanks be to Christ who redeemed us by his blood on Calvary. The price for sin and separation from God was paid. Scripture declares, “If we confess our sins, he is faithful and just to forgive us our sins, and to cleanse us from all unrighteousness” (1 John 1:9).

The good news is, God’s plan for the male, female, husband, wife, father, mother, and family remains the same. “And God blessed them, and God said unto them, Be fruitful, and multiply, and replenish the earth, and subdue it: and have dominion” (Genesis 1:28).