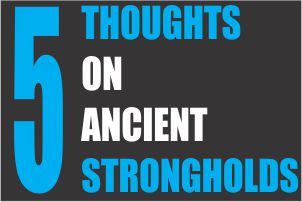 Ancient strongholds and evil paganism is warring against the Church of Christ, but Scripture declares you are well able to subdue the wicked. The Bible teaches, “The weapons of our warfare are not carnal but mighty through God to the pulling down of strongholds” (2 Corinthians 10:4).

Plato (429 BC) was a pagan philosopher that taught many subjects including that all things spirit was good and all things natural were evil. Some Christians in the middle ages were influenced by his mystical worldview and became “so heavenly minded they were no earthly good.” His teachings turned some away from the biblical responsibility to take dominion for Christ sake and gave dominion to the state. Plato was against individual liberty and viewed it as selfish. He wrote in the “Laws”:

“In a word, he should teach his soul, by long habit, never to dream of acting independently, and to become utterly incapable of it. In this way, the life of all will be spent in total community. There is no law, nor will there ever be one, which is superior to this, or better and more effective in ensuring salvation and victory in war. And in times of peace, and from the earliest childhood on should it be fostered, this habit of ruling others, and of being ruled by others. And every trace of anarchy (independent liberty) should be utterly eradicated from all life of all the men, and even of the wild beasts which are subject to men.”

Teachings such as that lead to a totalitarian warfare state. By rejecting the personal liberty and dominion expectation of God through righteousness opens a great door for the development of secular humanistic states and demonic authoritarian governments. In short, the government of the wicked.

The apostolic church is a governing church with governing disciples of Christ, the word of God, the Holy Spirit, and a robust spiritual life. It consists of apostles, prophets, evangelists, pastors, teachers, priest, and kings all working together to manifest the Kingdom of God on earth. It’s doubtful many understand the spiritual opposition that some ancients released against the Body of Christ. It’s not often you will read that ancient demon inspired Greek philosophers have caused some of the Church to withdraw themselves from obeying God, but in this, we will touch on the subject. This will help spiritual warriors like you follow Apostle Paul’s instruction to cast down every high thing that exalts itself against the knowledge of God, taking captive every thought, and putting on the full armor of God.

Christ has given you power saying, “Whatsoever you bind on earth is bound in heaven.” This is the spiritual authority to say no. (It's spiritual warfare.) It is the power to bind, as with chains, demon powers and their teachings. It opens doors and closes doors. It’s not power that the Christian seeks but rather power given by God to take dominion for Christ’s glory. Man was created in the image of God and commanded to take dominion over the earth (Genesis 1:26-27). Not only is man called to take dominion, but it is also in his nature to do so.

The word dominion was first used by God, not man. God created man in his image and with his nature. The redeemed man is a vicegerent of Christ,2 one appointed by his ruler to subdue and govern on His behalf. On His behalf or in His stead with legal authority from his maker is important to remember.

Since Adam’s treason, it is in the fallen nature of man to subdue and take dominion over the earth to fulfill selfish lusts and desires. The redeemed man, in contrast to the reprobate man, knows the differ¬ence and takes his charge of dominion as one with “delegated authority” who exercises dominion “under God.” In other words, dominion must always be on God’s terms.

The antithesis of the Disciple of Christ is the reprobate man. In his fallen state man desires to be God. Man can never be God because there is only one Sovereign and that is God Almighty, the Creator. Christ stands outside his creation. This makes Him the sovereign of all things. Man can never be God. Saint Athanasius wrote, “God is not nature, all the constituents of which are mutually interdependent. Nor is He the totality of its parts; for He is not compounded of parts on which He depends, but is Himself the source of existence to all. To think of God as composing and putting together the universe out of matter is a Greek notion, and it is to represent Him as a workman rather than as a creator.”

Secular humanistic dominion is seen in the reprobate and corrupted actions of man. The corrupted man forgets where the power to get wealth comes from. Scripture confirms the delegated authority of man that is submitted to the lordship of Christ. Scripture says, “But thou shalt remember the LORD thy God: for it is he that giveth thee power to get wealth that he may establish his covenant which he sware unto thy fathers as it is this day” (Deuteronomy 8:18). Christ also made it clear that he was the source of authority declaring, “Behold, I give unto you power to tread on serpents and scorpions, and over all the power of the enemy and nothing shall by any means hurt you” (Luke 10:19).

Power and dominion is not an end in itself. It’s not power that the Christian seeks nor is it dominion that the Christian seeks but rather power given by God to take dominion for Christ’s glory. He is risen! Christ taught to pray the Lord’s Prayer. “And he said unto them, When ye pray, say, Our Father which art in heaven, Hallowed be thy name. Thy kingdom come. Thy will be done, as in heaven, so in earth” (Luke 11:2).

This prayer confirms the Christian’s responsibility to advance the culture (laws, knowledge, values and expectations of Christ) of the Kingdom of God. Christ would not ask his disciples to pray “thy kingdom come” if it were not possible to achieve kingdom manifestation.

Throughout history fallen man, in an effort to subdue and take dominion have murdered millions of innocents. Trillions are spent buying weapons and maintaining militaries that advance and secure the various desires of politicians, states, people groups, gangs, and dictators alike. Because of the brute force used by some to subdue and control some Christians refuse the concept of dominion and can even turn hostile to the idea. Regardless, Christ has commanded his Disciples to “occupy” till he comes (Luke 19:13).

Occupy means to march aggressively into another’s territory with spiritual force for the purpose of conquest and occupation. One cannot bury his talents in the ground and expect a blessing from the Lord. Dominion requires labor and a subduing spirit.